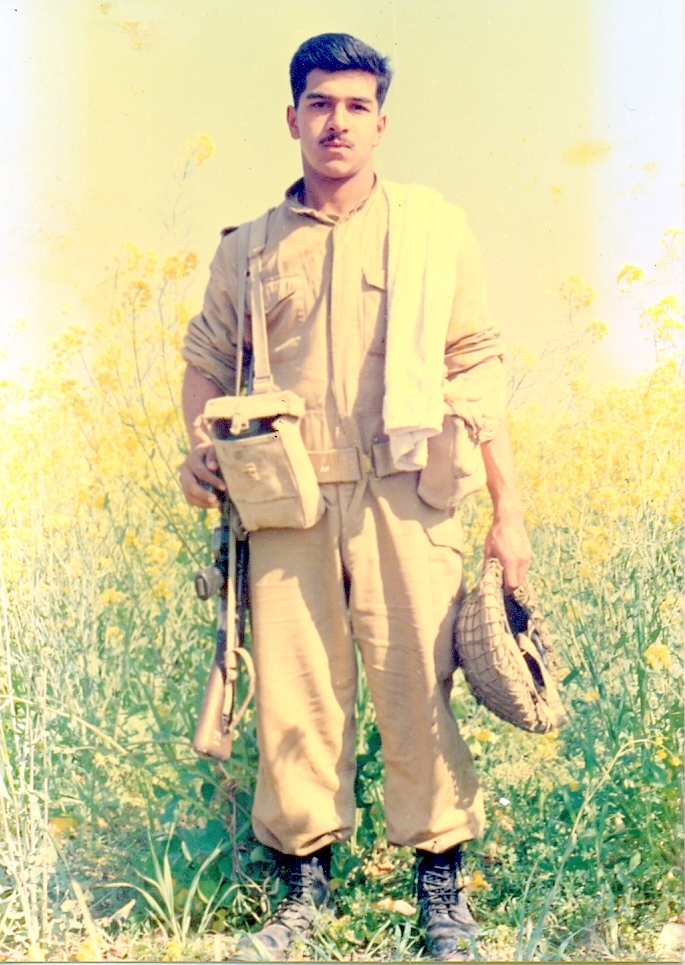 I woke up to a beautiful morning that day, had a shave and brushed my teeth when a friend took this photo of me.

Hi, today I am starting a new category in my Blog,  it is titled , “Military stories”. These are true stories based on my military life experience of 29 years! And I want to start it from my life at the Pakistan Military Academy, PMA Kakul. The photo of this post is from one of the exercises at PMA. Don’t I kook shabby!!! Well I remember it was a beautiful morning in winters somewhere out of the academy. But for now, I want to tell you about “the mile”….test…read on 🙂

Life at PMA is tough, it is physically very demanding, full of challenges, and in that nothing is more fearsome than the dreaded, “Mile Test”. And so in my first term, we were made to run the mile, in which most of the platoon failed. The mile is to be completed in 6 minutes, anyone finishing it in or less than 5 minutes and 30 seconds is given 10 points. So starting from 5.30 till 6 minutes after each 5 seconds the points keep getting low till the passing person who gets 5 points at exact 6 minutes and thereafter anyone crossing the line is a failure. So the first mile was failed by most of the platoon and the platoon commander was pissed off as a result of this we got extra Physical Training. I kept failing for a full month and after that things started to improve. In our days the mile was run around a track measuring 440 yards, so we had to do 4 rounds to complete the 1760 yards or the mile as it is called.

I can’t remember of a PT period in my PMA when we were not made to run the mile, maybe one or two occasions. Specifically remembering, when the PT JCO would announce “Mile test”, most of the cadets would run to the toilet straight away to the toilet to empty their bladders 🙂 Such was the fear imposed by the dreaded mile test.

It was sometime during the mid term, or after 3 months in to my training, the summers had arrived that we were to run the final mile before proceeding for the week long mid-term break. It was rumored that anyone failing it would not be allowed to go home and would spend the mid term break at the Academy! Obviously, no one wanted that, specially after 3 months of hard labor 🙂

So when the PT JCO announced that beautiful June morning, “Mile Test”, I psyched myself by emptying my bladder in the toilet and arrived just in time to the starting point. The JCO with the stop watch in his hand, looked at us with a comical look, and said those powerful words, “Go”. All hell went loose, I ran, we ran, and they ran. It was 30 guys of the platoon in competition with themselves, in competition with the clock, in competition for the mid-term break, running, panting, overtaking, cheering up those lagging behind, sweating, while the bystanders (mostly platoon commanders and the PT staff) cheered them up. The first round was easy, in the second, there was much some space between all of us, in the third the space was few meters or few seconds, and then in the final round we knew it was coming to an end, but hell no I wanted to get past everyone, and everyone wanted to get past me. The panting became intense, the “buck up” being heard was now a faint voice coming from nowhere, things appeared surreal, feet moved faster, steps became heavy, hand movements became more frequent and fast, but only till the half round was completed. After that it was just 220 yards, bloody 220 yards, now I could see the PT Staff lined up cheering us up. The sound in the handheld microphone of the PT JCO becoming louder with each step, 10 points I heard, 10 points again, 10 points, run faster run I said to myself, run for your honor, run for mid-term break, run for it to be over, run like never before, run like hell. And then as I crossed the finish line I heard the magic voice announce 10 points, immediately I turned around to see most of the platoon making ten except for a few. We had made it, a pack of us getting 10 points. That day no one out of the platoon failed the mile, it was all smiles and cheers after we had regained our breath. I can never forget that day, I got 10 points in mile. Dedicated to Hmz Pl 83 LC, PMA, commonly called as Hamzites.