I had to go to the tailor to get some clothes stitched and he happens to be in Saddar, Pindi. He’s kind of my family tailor or so I can claim as his father stitched clothes for my father, so it kind of runs in the family. The measurements done and tags pinned he told me to come after a week. That’s when we heard a big bang and all things electric seized to work, immediately. The seamster swore loudly and I walked out of the shop.

The view which unfolded before my eyes was not very pleasant. It goes like this…

And frankly that pretty much explains the quandary we as a state are in, haywire, topsy-turvy, heals over head, bonkers, daffy and what not. And sadly its all self created. See the labyrinth of cables and the mess created in this pic and you will put to shame the greatest of abstract artists. Imagine trying to trace a fault in this mess, at the peril of your life, if you will. Imagine trying to repair this! It is not the handiwork of a single man overnight, it is the cumulative result of at least a decade of neglect, incompetence, corruption and apathy. And by golly I feel so ashamed to be a part of it and not being able to do anything about it. Not that I don’t love my country, its actually the love that’s forcing me to lament about my grief.

As destiny would have it, I had to go to the hospital to get my mother’s blood report right after this. A big glass of lassi forced me to run for the loo and run I did only to find the flush tilted at an angle of no less than 45 degrees, as if done by an artist. The thing pretty much looked in a state of trance. And it refused to work! This led me to think aloud if I was having a bad day? 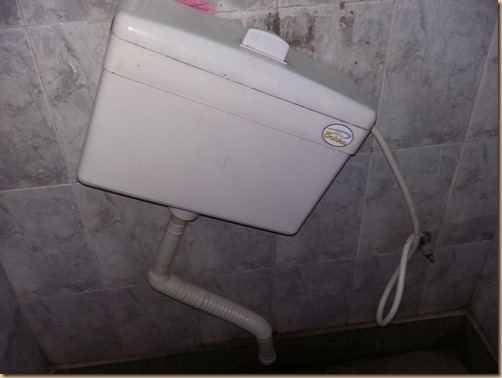 Nay, its not like that. Its actually the state we are in as a nation. It’s the State and people in quandary. Its like we have given up, like we don’t believe in ourselves, its like the whole thing needs revamping, its like this is what we are as a nation, its like the worst kind of indifference, numbness or spirirtlessness. Go to any chowk or chowrangi as they call it and you will realize what I am talking about, everyone of us will be in a hurry to outdo the other with no regard for traffic rules or respect for each other. It pains me to see al this almost everyday, and even more painful is the fact that I am unable to do anything about it. So what is the loner supposed to do? Lament off course. And that’s what I will do and so I chose to blog bout it.

2 thoughts on “The State in Quandary”