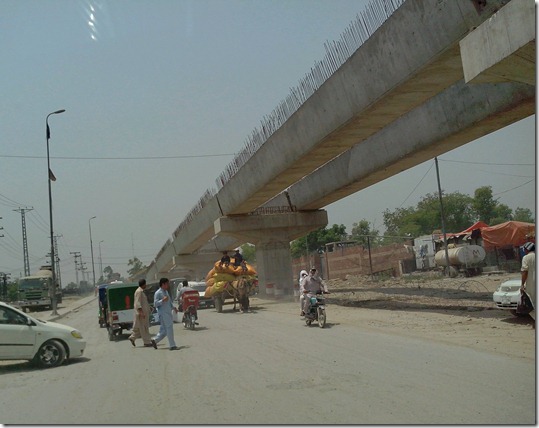 I have been in the city of Peshawar for the last two years. These two long years I have passed this point (twice daily) five days a week while going to work. They wanted to make this bridge, an overpass or something like it. In fact they have been trying not to make it for the last two years without fail and have pretty much succeeded in their malicious efforts. It was supposed to bring convenience to the public but on the contrary it has brought much inconvenience so far. And if the new Government does not do much about it, they are for sure going to act like their predecessors. Across the road where this bridge is leading is an even bigger mess, as those long slabs are still laying on the road. It is closed since last two years. I am sure corruption, nepotism, incompetence, putridness and synonyms of all these words which can sum up this ghastly scenario are to be blamed. And on top of it all is “apathy” by all. This is the handiwork of democracy. Hail democracy! Hail.