Pakistan is at odds with the Taliban since last few years. Whatever the causes maybe of this war, but the fact is that its costing Pakistan a lot in terms of lives, damage destruction to property and Government infrastructure. Pakistan Army, Pakistanis and anyone living in Pakistan have paid a heavy price in this war. One could write a book about the causes of this conflict but this post is about the ground realities of the areas terrorized by the Taliban. Wherever they go these so called Taliban commit acts of brutality that were perhaps previously unheard of.

From mass killing to public beheading to flogging of women, suicide bombings and destruction of public and government property you are sure to find a lot on the menu.  Aslam Khan (not his real name) is a dear friend of mine belonging to this unfortunate area, the FATA. He and his family had to vacate their hometown because they chose not to side with the insurgents. Consequently their house was destroyed and property looted. A few weeks back he went to his native village after it was cleared by the security forces. The photos he brought back are enough to bring tears to one’s eyes. There’s an idiom in English which goes like this “home is where the heart is”. And so his mud walled house and most of his village is now a deserted town, half destroyed, still he insists on going back someday because that is his “home’. The photos were snapped by him. He narrated the story and I decided to blog about it. 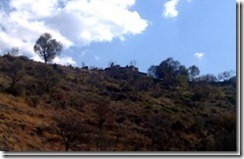 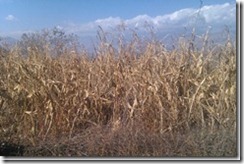 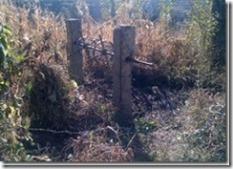 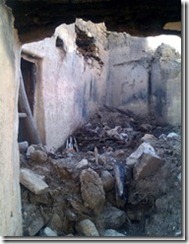 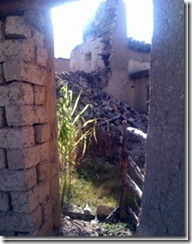 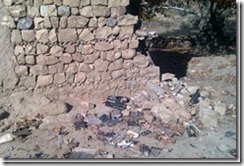 Was this the living room? 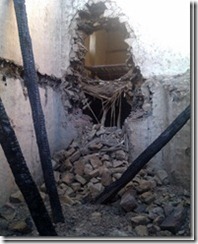 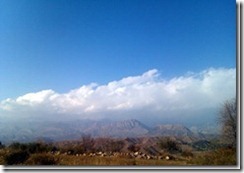 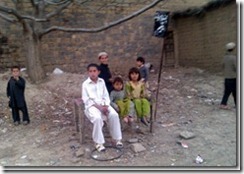 What was once a tranquil countryside.           Orphaned children awaiting help.

The last picture, is of a family, a boy and two small girls. Their mother and father both were killed by the Taliban as they decided not to side with them. The sign next to these children says, “Chanda barai yateem” which means “charity for the orphans”. These three kids do not have anyone to look after them except for a few relatives who have found it convenient to place this sign near the road, just in front of their house. The three kids now sit daily in front of it and anyone passing through this place gives them charity. This is their only source of sustenance. Heartbreaking indeed.  Such are the vagaries of war.